Rembrandt (biography) created over 300 works of art inspired by stories from the Bible. Most of these works are drawings and etchings. In addition, there are some 60 paintings on Biblical themes. This essay offers a summary of the style and subject matter of these works.

The development of Rembrandt's style is reflected clearly over time. His '20s and '30s works are tempestuous, almost baroque. He does not shun the grand, dramatic scenes, while focusing mainly on the action. During this period Rembrandt's canvasses and panels are moderately sized. Examples are Balaam and the Ass (1626) - a subject previously tackled by his master Pieter Lastman - and Judas Returns the Thirty Pieces of Silver. Please note that Rembrandt never created historical pieces with large numbers of extras such as Rubens did. Rembrandt would choose a limited number of characters and capture them at a key moment.

Around 1640 a change takes place. Rembrandt's preference shifts towards smaller tableaux, stilted, less exuberant and with a focus on the unambiguous expression of emotion. The first works that clearly illustrate this style shift are The Departure of the Shunamite woman (1640) en David's Parting from Jonathan (1642). 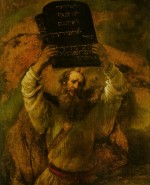 Not before the mid 50s does Rembrandt return to larger sized compositions. These include works as Bathsheba with the letter from King David (1654) and Moses Smashes the Stone Tablets with the Text of the Covenant (1659).

In his last Biblical works Rembrandt concentrates on his portrayal of characters only. Background and space are no longer of consequence. Examples include Haman Sets Forth to Honour Mordecai (approx. 1665), The Jewish Bride (1665) and The Return of the Prodigal Son (1668).

When choosing a subject Rembrandt would let himself be inspired by one of the many illustrations from his extensive collection. If categorized according to subject, the Biblical works consist for the main part of:

Rembrandt's day and age are on his side. These are prosperous times with enough money going around for art assignments. In addition, Rembrandt shows a preference for paintings with a historical subject and this is exactly what art connoisseurs of his day are rating highly, much more highly than the still-lives, landscapes and portraits which are largely made for a living only. Inspiration for historical pieces comes from classical writings, of course, but mostly from the Old Testament with its countless disasters, wars, wandering nations and other dramatic incidents in which threat and redemption are key issues, themes appealing to everyone's imagination since the Republic's liberation in 1648.

For a long time the clergy considered the Old Testament little more than a prelude to the New: the stories were mere proclamations of what was to come; affirmations of the truth of the teachings of Jesus. However, with the 16th century well on its way, the Old Testament begins to be appreciated for its own sake and the stories are seen separate from the Gospels. All this constitutes a blessing for artists such as Rembrandt, who can now offer their own interpretation of these stories and highlight the elements they think are the most important.

Tableaux from Genesis are extremely popular in the 17th century: about half of all Dutch paintings in this period taking their subjects from the Old Testament are in fact from Genesis. Maybe the boundless faith in God displayed by the Patriarchs Noah, Abraham, Jacob and Isaac fit the uplifting morals of the period. 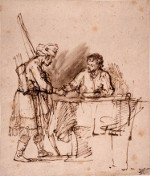 Judge Samson, portrayed in 1 Samuel, appeals to everyone's imagination: strong as an ox yet vulnerable, a hero, defeated by the underhand ways of the treacherous Delilah. Rembrandt portrays him several times: Samson and Delilah (1628), Samson Accusing his Father-in-Law (approx. 1635), The Blinding of Samson (1636) and Samson's Feast (1638).

Ruth is one of the few women that the Old Testament devotes an entire book to, and with four chapters to boot. The Book of Ruth is about helping out one's less fortunate family. Some of these works include: Ruth and Naomi, Boaz and Ruth, and Boaz pouring Six Measures of Barley into Ruth's veil. Ruth would later be grandmother to David. 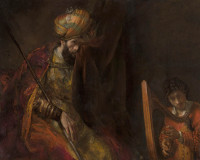 The young hero David posed a threat to the position of Saul, the first King of the Jews. Rembrandt portrays this episode twice and very differently. First in 1630, and then again around 1657. In the more recent version the despairing Saul is portrayed most strikingly. Other works on David are: David's Parting from Jonathan (1642), and Bathsheba with the Letter from King David (1654).

The Jewish people fighting against oppression, unwaveringly adhering to their faith and to their god fired everyone's imagination in the early days of the Dutch Republic, formally independent since 1648. The Books of Esther, Daniel and Tobit take place during the Babylonian exile and the Book of Judith is about a city under siege. Small wonder that Rembrandt, like so many others, chooses stories from these books as subjects for his paintings.

It must be noted that for a part these stories were considered apocryphal by the Protestant Church - i.e. not being part of the official Bible. But in the Catholic tradition they were considered part of the Bible and were widely known. The apocrypha were included in the first editions of the Dutch Authorized Version (first edition 1637), be it at the very end. Rembrandt fortunately did not care one bit about theological casuistry. 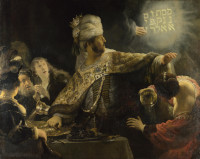 Works on Daniel: Belshazzar's Feast (1637), Daniel's Dream about the Four Animals, The Vision of Daniel on the Banks of the River Ulai (1650), Daniel in the Lion's Den (1652). The apocryphal story of Susanna's assault is portrayed in: Susanna and the Elders (1647).

Two drawings exist on Judith: Holophernes' Head being put into the Bag (1635) and Judith beheading Holophernes (approx. 1653). These are the only known works by Rembrandt on Judith.

The birth of the Redeemer is the key moment in Christianity and an inexhaustible subject for the expressive arts. Because the Bible does not say much about Jesus' childhood, it becomes a source of speculation for centuries to come, both in story telling and in works of art. Rembrandt is often inspired by the work of his predecessors and he expresses the apocryphal The Rest on the Flight into Egypt four times while the Bible officially does not mention the episode at all. 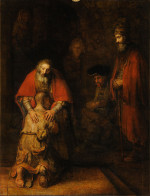 In Medieval days the period between the Birth and the Passion of Jesus is relatively ignored as a subject for painting. In the 16th century this changes, largely as a result of the rising popularity of parables.

With the exception of the Raising of Lazarus (4 times, in 1630, 1632, 1642 and approx. 1663) Rembrandt pays little attention to the miracles wrought by Jesus. The most well-known portrayal of Jesus' actions must be the Hundred Guilder Print, where the whole of Matthew 19 is portrayed in a single print. Other works from this period include: Jesus among his Students (1634), and again in 1652, and: The Storm on the Sea of Galilee, a painting from 1633.

Passion, death and resurrection of Jesus

Most episodes from the Passion, the suffering of Jesus between the Last Supper and the Resurrection, are at one time portrayed by Rembrandt. A small selection of these include:

Judas returns the 30 Pieces of Silver, The Denial of Peter, The Descent from the Cross, The Ascension of Christ, and The Apparition to Mary Magdalene.

Luke's story about the Men of Emmaus must have been very close to Rembrandt's heart since he devotes many works to it. Two followers of Jesus are joined by their deceased master on their way to the village Emmaus. They do not recognize him. Not until he breaks the bread in an inn are their eyes opened. In 1665 Rembrandt makes a pen drawing about The Walk to Emmaus. The meal at the inn is portrayed at least twice, once in 1628, and again in 1648.