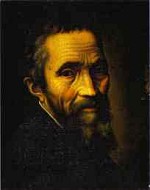 Italian Renaissance sculptor, painter, architect and poet. Generally considered one of the greatest artists ever. He worked in Florence and Rome.

Michelangelo receives his formal education from the painter Domenico Ghirlandaio and the sculptor Bertoldo di Giovanni. In Florence Michelangelo becomes acquainted with Classical antiquity, which will have enormous influence on his work. Via Lorenzo de' Medici Michelangelo meets some of the greatest scientists of his days.

In 1496 Michelangelo moves to Rome. One of his first major assignments is for the well-known Pietà in St. Peter's basilica. Back in Florence Michelangelo creates another masterpiece: David (1501-1504), now on display in the Academia.

Pope Julius II commissions the decoration of the ceiling in the Sistine Chapel (1508-12). The frescoes depict prophets, sibyls and scenes from Genesis. It shows Michelangelo's preference for strong, muscular figures. For four years he paints the ceiling, lying on his back most of the time. He does not paint much again until 1536, when he starts the Last Judgment, on the back wall of the Sistine Chapel, finishing the work in 1541.

Michelangelo dies in Rome in 1564. He is buried in Florence.

In his lifetime he was already famous and renowned, especially in Italy. He was also known as pessimistic and miserly. A famous quote: "The true work of art is but a shadow of the divine perfection."