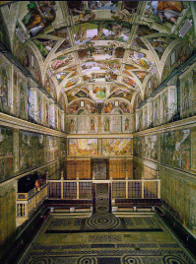 The inside of the Chapel, facing the entrance. The balcony on the left is the gallery for the choir. 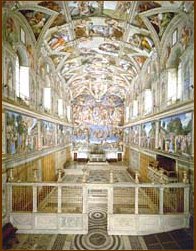 The inside of the Chapel, facing the altar.

As Pope Sixtus IV needed a chapel for domestic services he ordered the architect Giovanni dei Dolci to build him one. That was in 1473; the building was finished in 1481.

The Sistine Chapel is still being used by the Pope, mostly for official ceremonies. After the death of a pope, Roman Catholic cardinals from all over the world gather in the chapel to elect a successor. Today, the building is part of the museums of the Vatican.

The chapel has a rectangular shape. It measures 41 × 13 meters (134 × 43 ft.) and was built using somewhat ordinary bricks. From the outside there is nothing spectacular about the building. It has a barrel-shaped roof, topping 20 meters. On the inside, the chapel is divided into 2 by a transenna: a fence made from marble. The part facing the altar is only accessible to priests.

Each of the two long walls has 6 large arched windows. The walls are covered by 3 virtual rings with decorations. At floor level: tapestry designed by Raphael, showing scenes from the gospels and the Acts. In the middle: frescoes with scenes from the lives of Moses and Jesus. The top row, next to and between the windows, shows images of popes.

The choice to display both Moses and Jesus was no coincidence. It was meant to visualize the continuity between the old and the new covenant, Moses' laws and Jesus' teachings. Originally the stories started on the wall behind the altar. They still meet on the wall above the entrance.

The paintings on the walls and on the ceiling are widely considered to be the peak of Renaissance art. Most praise goes to Michelangelo's ceiling and Last Judgment on the wall behind the altar.

Several popes have had their say in the development of the art in the chapel. In that process, four phases can be distinguished:

This wall is devoted to the life of Jesus. From left to right:

This wall has frescoes with scenes from the life of Moses. From right to left:

A part of the wall containing the entrance door collapsed in 1522, destroying several frescoes: the Resurrection of Jesus by Domenici Ghirlandaio and Luca Signorelli's fresco of the discussions on Moses' remains. They were replaced at a later date by works on the same subjects by Hendrick van den Broeck and Matteo da Lecce. 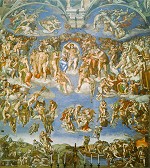 It was Pope Paul III who asked Michelangelo to decorate the wall behind the altar with a fresco showing the Last Judgment: the moment when God judges man. Previously, in the 15th century, Pietro Perugino had decorated the wall with an altarpiece and 2 frescoes. They were related in subject matter to the side walls showing episodes from the lives of Moses and Jesus.

Michelangelo's fresco was inaugurated in 1541 after five years of painting. After the master's death most of the fresco's genitals were covered upon the insistence of prudent priests. The fresco was restored in 1993; the cover-ups were left as they were.

The lower walls were the only part of the chapel where Leo X could set his mark. Under Sixtus IV they had been painted with fictive tapestries in gold and silver. Leo decided to have the walls covered with real tapestries. He commissioned Raphael to make the designs. For Raphael this was the big chance to leave his mark in the chapel where his great example Michelangelo had worked. 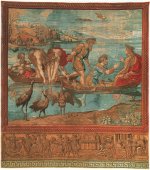 Ten tapestries still exist. It is not known how many tapestries Leo ordered - ten is not enough to cover all the walls. There are some indications that he may have asked for sixteen. The surviving tapestries are all in the Vatican museums, usually in the Pinacoteca. They are displayed in the Sistine Chapel only at special occasions. Of the cartoons Raphael painted, seven remain. They were acquired by the English prince Charles in 1623 and have been in the Royal Collection to date. The cartoons are magnificent works of art by themselves. They are on display in the Victoria and Albert Museum in London.

Raphael and his workshop started in 1515. They probably had the cartoons ready by 1516. By 1517 the designs had been sent to the workshop of weaver Pieter van Aelst in Brussels. The tapestries were all in Rome by 1521.

The painting of the ceiling took four years. It took its toll on Michelangelo's health: working on his back, an impressive amount of paint must have entered his lungs. But it was certainly worth the effort.

After finishing the work in 1512, Michelangelo switched to making sculptures, hardly painting anything until 1536, when he started on the Last Judgment.

The central part of the ceiling shows scenes from Genesis. On both sides are several Biblical prophets and some sibyls: female prophets from ancient times, who, according to the Church, had predicted the coming of Jesus. Among the prophets are all the major ones: Isaiah, Ezekiel, Jeremiah and Daniel. In the lunettes above the windows a number of Jesus' ancestors are shown, Boaz being one of them. It is unclear who the figures in the triangular parts above the lunettes represent. The corners of the ceiling show the rescuing of the Israelites, which was seen as a prelude to the Salvation.

Seated above the entrance is Zechariah. Along the northern wall, from left to right: the Libyan Sibyl, Daniel, the Sibyl from Cumae, Isaiah, and the Delphic Sibyl. 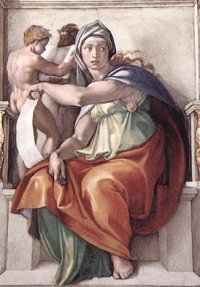 Along the southern wall, from left to right: Joel, the Erythrean Sibyl, Ezekiel, the Persian Sibyl, Jeremiah. At the short side, the prophet above the altar is Jonah, who got to be in this eye-catching spot because he is often seen as a predecessor of Jesus.

The chapel is located in Vatican City, a tiny independent state entirely surrounded by Rome. Entrance is free on the last Sunday of every month. Crowd alert.