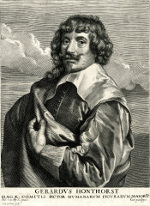 Gerard (or Gerrit) van Honthorst was a Netherlandish painter, born in Utrecht. He studied with his father and with Abraham Bloemaert.

Around 1610 he travelled to Italy, probably together with Bloemaert. In 1620 he was back in Utrecht, where he married Sophia Coopmans. He was one of the founders of the Utrecht painter's guild. In 1628 he spent a few months in London, commissioned by Charles I to decorate the Whitehall Banqueting House.

He was court painter at the court of the Dutch stadtholder William II. Between 1637 and 1651 he therefore worked both in Utrecht and in The Hague.

The portrait is print made by Paulus Pontius after a painting by Anthony van Dyck.