home » Art » special topics » The Way of the Cross

Jesus and The Way of the Cross

The Via Dolorosa is the journey undertaken by Jesus, starting at the place where Pilate sentenced him to death and ending on Mount Golgotha (Calvary) and is also known as the Way of the Cross or the Via Crucis. Jesus walks this distance carrying the cross upon which he will be crucified.

When the Way of the Cross is commemorated in Catholicism this is done by a sort of prayer wherein the faithful imagine the various tableaus of the journey, known as The Stations of the Cross. The word 'station' stems from Latin 'statio', meaning: I stand. As far back as the 16th century these stations could be seen along the street Via Dolorosa in Jerusalem, a well-known voyage for pilgrims.

The Way of the Cross is the closing part of The Passion of Christ: the suffering of Jesus who redeems humankind from its sins with his death - a core element in Christianity. The Passion usually begins with Jesus predicting that he will be crucified (Matthew 26:2) and includes the Last Supper. The Bible does not mention the Way of the Cross much but imagination has run its course over the centuries. Numerous Ways of the Cross have been thought up with varying numbers of stations in all sorts of orders. Today, 14 stations are distinguished.

1. Jesus is sentenced to death 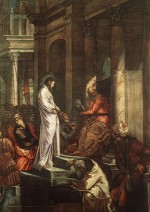 The Roman Prefect Pontius Pilate sentences Jesus to death for allegedly calling himself King of the Jews. According to the Gospels, Jewish priests had strongly insisted upon this sentence. For this reason, the Bible says that Pilate does not feel responsible for his deed: he washes his hands in innocence.

2. Jesus heaves the cross onto his shoulders

According to the Gospels Jesus is flogged after sentencing, made to wear a crown of thorns, and mocked. Outside, the cross lies waiting for him. 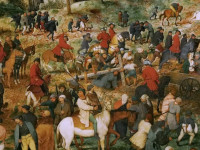 Severely weakened by the loss of blood from the flogging and the crown of thorns, Jesus falls.

5. Simon of Cyrene carries the cross 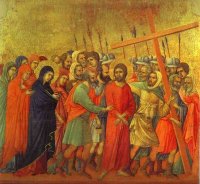 Simone of Cyrene, a passer-by coming home from the field, is commanded to carry the cross for Jesus. The Romans probably feared that Jesus would not make it to Golgotha on his own.

According to legend, when a woman named Veronica dries Jesus' face an image of his face is imprinted on the cloth. The Bible does not mention Veronica. Luke 23:27 is often quoted as a source for the legend because it mentions a large multitude, among which there are women beating their breasts and wailing. The name Veronica comes from the Latin words vera, meaning true, and icon, meaning image.
Hieronymus Bosch also made a passion work about Veronica.

The Bible does not mention Jesus tripping, collapsing or falling. It is not unlikely that these details were added to underline the severity of the relatively short trip, and serve to illustrate the gigantic burden of the sins of all mankind that Jesus had taken onto himself. 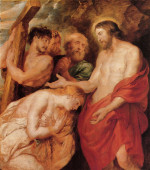 Luke 23:28-31: But Jesus, turning to them, said, "Daughters of Jerusalem, don't weep for me, but weep for yourselves and for your children [...]
These words are sometimes seen as a foreboding of the destruction of the temple in AD 70. So it could be taken to mean: 'Do not mourn now, save your tears for when things will be worse.'

He gets up, of course, determined as he is to die as a human being despite his divine nature.

10. Jesus is robbed of his clothes

11. Crucifixion: Jesus is nailed to the cross 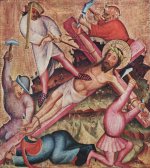 The actual nailing is hardly ever depicted in art - with an exception for Ways of the Cross.

12. Jesus dies on the cross

Over the cross a sign is nailed bearing the inscription INRI: Iesus Nazarenus Rex Iudaeorum, Latin for: Jesus of Nazareth, King of the Jews. Before he dies, he speaks: Father, forgive them, for they do not know what they are doing (Luke 23:24).

13. The body of Jesus is taken from the cross 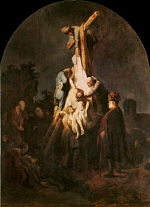 Crucifixion was not an unusual punishment in those days. The Romans would leave the deceased hanging on the cross as a prey for scavengers. A certain Joseph of Arimathea is granted permission by Pilate to bury the body of Christ. John claims that this Joseph was a secret follower of Jesus: John 19:38 [...] who was a disciple of Jesus, but secretly so because he feared the Jews [...].

14. The entombment of Jesus 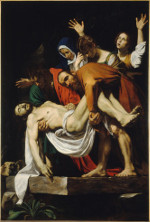 Joseph wraps Christ's body in strips of linen and puts him in a grave hewn from the rocks. John records that Joseph had the assistance of a man known as Nicodemus. The grave was the one that Joseph had had someone construct for himself.
Joseph became the inspiration of many legends outside the Bible. He is said to have gathered the blood of Christ in a chalice known as the Holy Grail. Later he is supposed to have taken this grail to England. 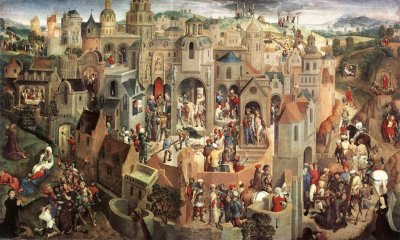 Hans Memling worked all tableaus from the Passion of Christ into a single painting.