On the evening before his death, Jesus calls his disciples together for supper, which will be his last. Before the meal he washes the feet of everyone attending. During the meal Jesus discloses the fact that he will be betrayed by one of his twelve followers. He shares the bread and wine, generally considered symbols for his body and blood. The Last Supper is described most clearly in the Gospels of Mark, Matthew and Luke. 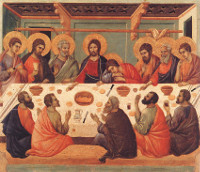 This dramatic gathering has been a source of inspiration for the visual arts. The first paintings of The Last Supper were quite static - as can be seen in the works of Duccio (1308-11) and Ghirlandaio (1480). All figures are nicely seated in their chair, despite the fact that they have just learned of their master's coming betrayal.

A difficult problem for all painters of the tableau is the grouping of the figures. Duccio chose a reasonably credible one: everyone is seated around a table. A drawback of this grouping is that the faces of some of the followers are not visible. Ghirlandaio has them seated behind a long table opposite the traitor Judas, who sits alone.

Leonardo da Vinci effected a breakthrough with his Last Supper (approx. 1495-98). Not only is Judas fully included in the group, but the figures are engaged in lively interaction. Da Vinci's fresco inspired numerous Renaissance artists and Baroque painters. Despite many restorations, the most recent in 1999, the work is in bad condition, due to the technique used on the wall, which has insufficient sticking power. In addition, the hall was used as a stable for some time, and bombed during World War II. 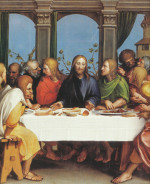 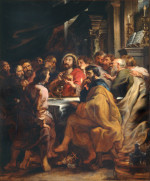 The Catholic Church annually commemorates the Last Supper as the Holy Supper, on Maundy Thursday.

The Last Supper in other languages: