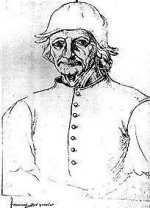 Jherominus Bosch, a.k.a. Hieronymus Bosch, Jeroen Bosch or Jerome Bosch. Dutch mediaeval painter. Born as Jeroen van Aecken in the city of Den Bosch a.k.a. 's-Hertogenbosch (the Duke's forest) or Bois-le-Duc in French, major city in the southern province of Brabant.

Jeroen Bosch lives in turbulent times. Europe is haunted by the plague and many fear for the end of times. More tragedy befalls the inhabitants of Den Bosch when much of their city is destroyed in a fire in 1463.

These events must have influenced Jeroen Bosch's work, characterized as it is by fear, horror, sin and disaster. His fantastic style and innovative themes contrast sharply with the realistic and somewhat serene work of his contemporaries. Only such an extraordinary talent as Bosch's could have taken such innovation to the top.

His work is greatly admired at the time of his life, nationally and internationally, e.g. at the Castilian court. King Philip the Handsome of Spain himself commissions The Last Judgment.

A member of the prominent Brotherhood of Our Lady, a deeply pious lot, Jeroen Bosch is probably a very devout man. His work is riddled with religious symbolism. The complete collection of his works comprises 25 paintings and 8 drawings. He only signed a few of his works, with 'Jheronimus Bosch'.

Jeroen Bosch probably spent most of his life in Den Bosch. He was married to Aleid van de Meervenne, a young woman from a wealthy family.