The Tower of Babel

After the Deluge, Noah's descendants settled in the lowlands of Sinear, not far from the Euphrates. The spoke a common language and formed a single community. Genesis 11 tells their story: 'And they said, Go to, let us build us a city and a tower, whose top may reach unto heaven; and let us make us a name, lest we be scattered abroad upon the face of the whole earth.' In addition, the tower had to serve as a landmark to keep people together, despite the fact that God had commanded Noah and his sons to 'replenish' the earth (Genesis 9:1). Also, the tower could be used as a safe haven in case of a new flood. 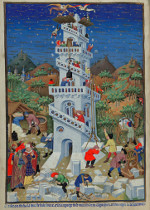 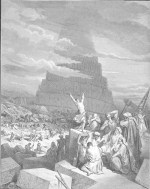 Cornelis Anthonisz (1547): fall of the tower

God looked down upon these industrious souls, and judged that in their ambition they were trying to equal him. So he decided to punish them with the Confusion of Tongues. Since people could no longer understand each other, they were scattered over the earth at last. The site of the event would from that day on be known as Babel, apparently meaning 'confusion'.

Pieter Bruegel the Elder painted the Tower three times, but his first version was lost. The two surviving canvasses (both probably from 1563) show intricate detail and are definitely worth viewing in the original. The larger painting measures 114 x 155 cm and can be admired in Vienna's Art History Museum. The smaller measures 60 x 74.5 cm and forms part of the collection of Museum Boijmans van Beuningen in Rotterdam, the Netherlands.

In the foreground of the larger Babylonian Tower stands a figure of authority - some sources suggest that this Nimrod was overseeing the Tower's construction. The countless tiny figures emphasize the tower's gigantic proportions and the insignificance of mankind.

Bruegel visited Rome in 1552-1553. It is not unlikely that he used the Coliseum as an inspiration for his impression of the Tower as the Coliseum was a building that Christians of his day would certainly consider an expression of faithless pride. At first sight Bruegel's towers look sturdy and well-constructed, but on closer inspection it strikes the viewer that the design contains flaws, probably inserted to indicate how bold and presumptuous the whole project was.

Pieter Bruegel was not the only artist whou would depict the Tower. His compatriot and contemporary Lucas van Valckenborch made almost indentical paintings: a round tower, Coliseum-like, Nimrod. Others used the Tower in depictions of the apocalyptic destruction of Babylon.

There is evidence that the Tower of Babel actually existed. But in all fairness it was not built as Bruegel thought. Ancient clay tables tell of a ziggurat - a temple tower in the form of a terraced pyramid of successively receding stories. The Marduk ziggurat or Etemenanki was 91 meters in height and set on a 91 x 91 meters base and is believed to have had 7 tiers. Marduk was the main Babylonian god. So it is possible that our Biblical story finds its origin in Mesopotamia, as does the story of the Flood. Destroyed by the Assyrian King Sanherib in 689 BC, the Marduk ziggurat was reconstructed and perfected by the likes of Nebukadnezar II. In 478 BC the ziggurat was demolished again, this time by the Xerxes Persians. The Babylonians named their tower Bab-Iloe, Port of God.

Jews in the Babylonian captivity must have seen the ziggurat. From cuneiform writings it appears that this tower was built to reach the heavens. To worship an idol in such a monstruous building, and reach for heaven: Jewish priests must have condemned that. Perhaps disgust of the building contributed to the creation of the biblical story of the Tower.