The Lamb of God

The most well-known work of the painter brothers Hubrecht (Hubert) and Jan van Eyck is undoubtedly the altar piece in the Vyd Chapel in St. Bavo's Cathedral in Ghent. The official name is The Adoration of the Mystic Lamb, after the lower middle panel, where a lamb is worshiped by groups of angels, martyrs, prophets and apostles. The work in 1432 was one of the first painted altar pieces in North and West Europe - until then these works would be wood-cuts.

Adoration of the Lamb

What is represented on the oak panels? A few ideas and terms may clarify:

Lamb of God
The lamb, bleeding from its neck is symbolic for Jesus sacrificing his life in order to redeem humankind from its sins. People gather around from everywhere to watch the show, just as they did when Jesus was crucified. The blood of the lamb (i.e. innocence) flows into a chalice: this explains the symbolic drinking of wine at church services.
The term Lamb of God is found in John 1:29: The next day John saw Jesus coming toward him and said, "Look, the Lamb of God, who takes away the sin of the world!"
Further on, in the Revelation of John, the lamb plays a key role.
The Latin term for Lamb of God is Agnus Dei.
Polyptych
The work consists of twelve oil painted oak panels.
Vijd Chapel
Commissioner of this work was Jodocus Vyd, who is shown on the polyptych in closed position, bottom left. The woman bottom right is his wife, Isabelle Borluut.
St. Bavo
Local 7th-century saint after whom the cathedral was named. He lived a life of sin until his wife died. He then converted to Christianity, founded a convent and lived in a hollow tree - according to tradition.

The Van Eycks were among the first to work with oil paint. In this altarpiece they applied the paint in thin layers onto a white chalk underground, thus creating a translucent effect.

The view when closed 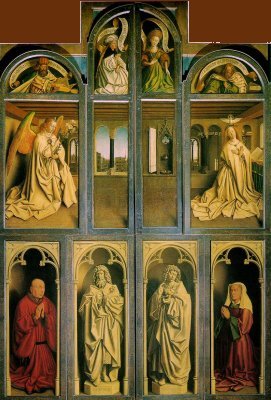 The Adoration of the Lamb of God - wings closed

Upper row, starting left: the prophet Zachary, Sibyl Erythraea, Sibyl Cumae, the prophet Micha. A sibyl was a woman in state of ecstasy, speaking prophesies. In the visual arts Sibyl Erythraea (a place in Greece) was often used as symbol of Asia, and likewise Cumae (near present-day Naples) for Europe. The Sibylline Books are, amongst other things, a collection of writings of a Judean Egyptian author in which monotheism is propagated.

Middle row: the Archangel Gabriel tells Maria she is the chosen one. Maria takes fright but accepts her duty. The scene calls to mind 15th century Ghent rather than Nazareth around the year 0: we see a street and a washbowl. 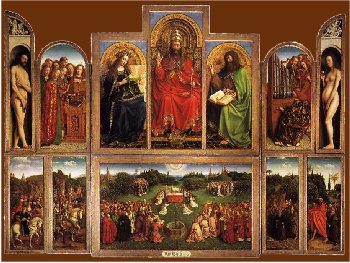 The Adoration of the Lamb of God, wings opened

Lower row, starting left: the honorable judges (replica from a panel stolen in 1934); knights of Christ (crusaders); the Adoration of the Lamb of God; a group of hermits; a small procession of pilgrims.

The naked Adam and Eve are the first known nudes in Flemish art. Note Adam's right foot: he seems about to step out of the painting. The combination of three consisting of the Virgin Mary, God or Jesus, and John the Baptist, is known as a deesis - an ancient Byzantine theme.

It is presumed that Hubrecht van Eyck (1370-1426) started the work, and his younger brother Jan van Eyck (1390-1441) finished it. It is not clear, however, who painted what. Research has not yielded any technical differences between the parts of the altar piece, and there exists some doubt about the existence of Hubrecht. What the piece does show is how the Revelation of John served as an inspiration.

The altar piece was inaugurated 6 May 1432 - as it is also noted on the list, with the words: VersU seXta MaI. Vos CoLLoCat aCta tUerI. The capitals make up a chronogram indicating the date: V+V+X+M+I+V+C+L+L+C+C+V+I = 1432.

The Van Eyck brothers are not alone in portraying the Lamb of God. The same subject is depicted on the main panel of the Isenheim Altar (1510-1515) by Matthias Gr�newald.

To view the panels in detail, visit Closer to Van Eyck.