Matthias Grünewald painted an impressive altarpiece between 1510 and 1515 for the monastery of the Order of St. Anthony at Isenheim, in the Elzas near Colmar. Today, the altar is on display at the Colmar Museum. The wood statues enclosed in the folding altarpiece were carved by Niklas Hagenauer.

The altarpiece was often shown to people suffering from Saint Anthony's Fire, a painful disease. It was thought that the beauty of the art and the image of Christ's suffering would help the patients.

The altar has two sets of folding wings, bringing the number of views to a total of three. 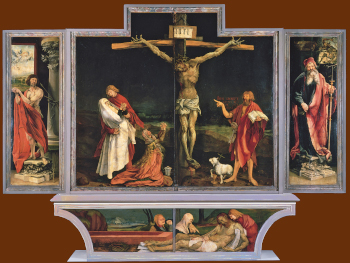 The left panel shows St Sebastian (the Martyr). The right shows St Anthony (the Hermit). The base (the predella) shows the entombment of Christ. 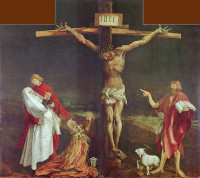 The first view, with the wings closed, is a heart-rending crucifixion scene. On the extreme left we witness a mourning Virgin Mary, all in white, comforted by John the Apostle. Mary Magdalene is kneeling in front, praying. On the right, John the Baptist appears to be saying: Illum oportet crescere, me autem minui (John 3:30) or: 'He must become greater, I must become less' - words with which the ever modest Baptist exemplified Christ's position as well as his own quite some time before the death of his master.

Please note that it was unusual at the time to portray the figure of Christ as horribly twisted and mangled as it is here. The blood of the Lamb is collected in a chalice - almost as if to save it for later consumption (ref. Van Eyck's brothers' The Lamb of God). 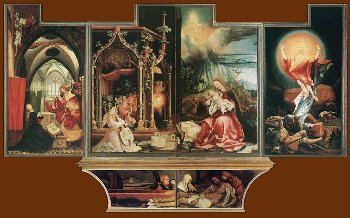 When the outer wings are open we see: 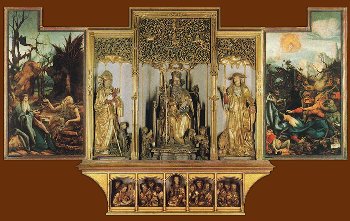 When finally the inner wings are opened, they disclose the wood carvings by Niklas Hagenauer, with St Anthony once again in the middle, flanked by the Church Fathers Augustine on the left and Hieronymus on the right. The pedestal shows The Last Supper by Desiderius Beichel. On the side panels Grünewald depicts scenes from the life of St Anthony: left his visit to Saint Paul of Thebes (traditionally clad in palm leaves only) and right the Temptation of St Anthony.