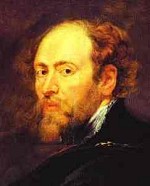 A.k.a. Pieter Pauwel Rubens, South Netherlandish painter and draughtsman, famous during his life and thereafter.

At first Rubens paints mainly biblical and mythological tableaux, while his Antwerp period (1608-1618) is characterized by its abundance of portraits. After Rubens retires to his country estate 't Steen at Elewijt in 1635, he dedicates himself to landscape painting.

Between 1600 en 1608 Rubens travels through Spain and Italy, where he is influenced by the likes of Michelangelo and Raphael. Back in Antwerp in 1609 he marries Isabella Brandt. After her death in 1620 Rubens sets out on his travels once again, marrying Hélène Fourment in 1630.

Rubens is the embodiment of Flemish baroque. His temperament helps him break with the reigning, rigid style of his day. Characteristic of his work are the many voluptuous nudes, chubby to modern standards.

Rubens draws more commissions than he can handle; in his workshop others do much of his work for him. Often Rubens would draw the composition and add the final touch.