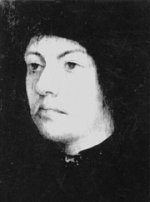 German painter and printmaker, born in the city of Colmar in the then German region Alsacce. His exact date of birth is not known. It is presumed that he was born between 1445 and 1450, as the son of a goldsmith.

Not much is known of his life. In 1465 he enrolled at the university of Leipzig. He then travelled in Burgundy and the Netherlands, before settling in 1470 in Colmar. In Colmar he established a successful workshop.

In his paintings he was influenced by the Flemish Primitives, like Rogier van der Weyden and Jan van Eyck. He copied their use of landscapes to create depth in the background, and Van der Weyden's rich use of color and detail.

His most famous work is the Madonna in the Rosary, an altarpiece in St Martin's church in Colmar. It is one of few paintings that with certainty can be attributed to Schongauer.

Schongauer was one of the first painters who was also a skillful printmaker. As such he was the predecessor of the great German master Albrecht Dürer (1471-1528). They never met. Dürer travelled to Colmar in 1492 to meet the master, but arrived too late.

Some of Schongauer's prints were just as rich in detail as his paintings, even though they obviously were much smaller. During his life many copies were printed.

He probably died in 1491, in Breisach on the Rhine.