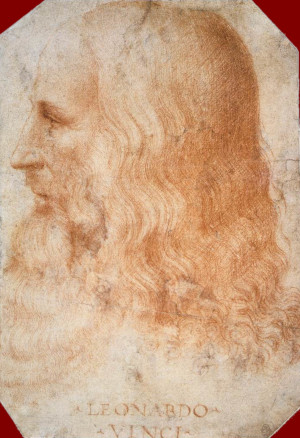 Florentine artist, scientist, inventor, architect, astronomer and poet, with an unequaled talent for drawing, central to most of his art. His paintings are characterized by movement and expression. Despite his innovative insights and enormous fame during his lifetime, Leonardo's influence on other painters is not as extensive as that of the other giants of the Renaissance.

Born in the village of Vinci, Leonardo's mind is molded by nearby Florence where he studies under various masters, including Andrea del Verrocchio. In 1482 Leonardo leaves for Milan, where he stays with Ludovico Sforza and creating such works as The Last Supper. After Milan is taken by French troops in 1499, Leonardo returns to Florence, where he lives between 1503 and 1506. In the Palazzo Vecchio he works on murals - most of them sadly lost. Until 1512 he lives once more in Milan where he undertakes numerous scientific studies. Many notes and sketches of these studies survive.

In 1513 he finishes a painting he had begun in 1503 and which he had brought with him every time he moved: La Gioconda, better known as the Mona Lisa, now on display at the Louvre in Paris.

From 1513 until 1516 Leonardo stays in Rome at the invitation of Pope Leo X. In 1516 the King invites Leonardo to France. Until his death in 1519 he lives in a country house near Amboise with his friend and apprentice Melzi (the maker of the portrait on this page).

The versatility of his genius is possibly best illustrated by the fact that the man who painted the Mona Lisa may also be considered the world's first geologist. Da Vinci was involved in the construction of canals in Northern Italy and for this he studied the origin of fossils, the causes of erosion and sedimentation by rivers, and the upheaval from seabed to land. A true homo universalis.