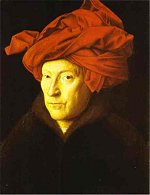 Flemish painter, often lauded as the founding father of Dutch fine painting and the inventor of the oil paint technique. This last, however, is not strictly true. Van Eyck was one of the first to widely test the possibilities of oil painting, e.g. by not letting one layer dry before applying the next.

His exact dates of birth and death are not known. Probably born in Maaseik (hence his name) around 1390, Van Eyck works for John duke of Bavaria and Philip the Good, for whom he arranges his marriage to Isabella of Portugal. In 1432 Van Eyck settles in Bruges, where he dies in 1441.

Van Eyck's most famous work is the retable for the St Bavo's Cathedral in Ghent - a work in 20 panels with The Adoration of the Lamb of God as its central piece. The work is widely considered as one the highlights of the Northern Renaissance. It is not universally accepted that Jan painted it all himself; it is possible that he finished the work of his brother Hubert (or Hubrecht; 1370-1426). Another painting displayed on this site, The Three Marys at the Tomb, was probably created in collaboration with Hubert.

Some 30 works by Jan van Eyck survive, mostly religious works and portraits. The Man with the Red Turban, shown here, is probably a self-portrait.