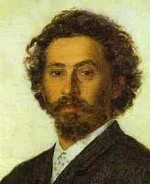 Born in the Ukraine, Repin is first trained as an icon painter. During his studies at the Academy of Arts in St Petersburg, where he is first refused Repin becomes convinced that true art should represent true life. One of his earliest works, Burlaks (The Boatmen on the Volga), fits that principle to the tick; it clearly illustrates how men are cheaper labor than horses. It is an instant hit and remains his most famous work to date. In addition to work critical of the existing social structure Repin creates historic tableaux and paints portraits, e.g. of Mussorgsky and Tolstoy.

At the academy Repin paints some biblical tableaux. For his graduation project The Raising of Jairus' daughter he is awarded a gold medal and a fellowship for no less than six years abroad. With his wife Vera he leaves for Europe. During their stay in Paris he is introduced to a new movement, that of impressionism, but sticks to his own almost photographic realistic style.

His best work is made in the 19th century. After the bolshevist assumption of power in 1917 Repin retires to his country estate in Finland.

This is a self-portrait from 1887, oil on canvas, and part of the Tretyakov Gallery collection in Moscow.