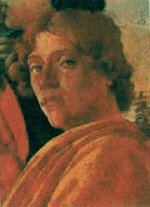 Sandro Botticelli was born Alessandro di Mariano Filipepi in Florence around 1445. He worked in Florence all his life where many of his works today are on display in the Uffizi museum. The only interruption from his life in Florence was his short stay in Rome, where he produced 3 frescoes for the Sistine Chapel.

After his training with Frà Filippo Lippi, father of Filippino Lippi, Botticelli fell in with the Florentine rulers of the day - the De' Medici family. Through circles surrounding the artistic Lorenzo 'il Magnifico' he received commissions for classical works, including the Birth of Venus and Primavera (Spring). At the same time he worked on a religious body of works.

After Lorenzo's death (1492) and the De' Medici family's decline, Botticelli all but stopped producing classical works. Possibly influenced by a more Puritan shift in the spirit of his times, his work became mostly sacred and characterized by a melancholy bordering on pathos. Botticelli died in Florence in 1510.

Botticelli got his name from his corpulent brother who was nicknamed il botticello or: the small barrel.