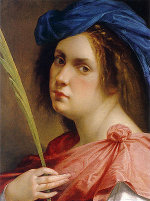 Italian painter. Artemisia Gentileschi was born in Rome in 1593. Her father was the Tuscan master Orazio Gentileschi. She and her brothers received their first artistic lessons in their father's workshop. It soon became clear that Artemisia was much more talented than her brothers.

She made her first well-known work at the age of 17: Susanna and the Elders. Some think that Artemisia had been harrassed just like Susanna, and that she used that experience in the painting.

Being a girl she was not accepted into any painting academy. Her father then had a colleague give her further lessons. This Agostino Tassi not only taught her painting but raped her as well. When that became public Tassi was sent to jail for a year.

Artemisia's father quickly arranged a marriage, in order to save his daughter's honour. She married Pierantonio Stiattesi. The couple moved to Florence, where Gentileschi became a celebrated artist. She was accepted into a painters' academy, befriended Galileo Galilei and was protected by the powerful de' Medici family.

In 1621 Artemisia Gentileschi moved back to Rome. She probably also spent some time in Venice between 1627 and 1630. This was not a very successful decade.

Just like Caravaggio, who still had much influence at the time, Gentileschi moved to Naples, in 1630. She also worked in England for a while, beginning in 1638. Her father had a position at the court of Charles I. Some time after his death in 1639 she returned to Naples, where she was to work for the remainder of her life.

It is not known exactly when she died. It is thought that she was one of many victims of the great pestilence that struck Naples in 1656.

Her father was heavily influenced by the baroque master Caravaggio, and so was the young Artemisia. She is considered to be one of his most talented followers. Later she added classical influences into her work.