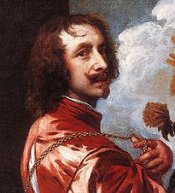 Southern-Netherlandish painter, a major Baroque artist. Van Dyck was the son of a wealthy merchant from Antwerp. At the age of ten he already studied with a master painter, Hendrik van Balen. In 1615 he opened a workshop together with Jan Brueghel the Younger. His talent was recognized by his main example, his fellow Antwerp painter Peter Paul Rubens. Rubens employed Van Dyck in 1617. The oldest known and remaining work from his early period is a bearing of the cross from 1617.

In 1620 he made his first journey to England, where he stayed at the court of king James I. The next year he travelled to Italy, where he spent most of his time in Genua. His main example in Italy would be Titian. Van Dyck also developed his skill in the painting of portraits, a genre that was to become his favourite. In Italy his style lost some of its strong melancholy and gained in sensitivity, with the use of warm southern colours.

Back in Antwerp (1627) he enjoyed great fame and produced a series of masterpieces. One of those is a portrait of the archduchess Isabella, the governour of Flanders, who had appointed Van Dyck as court painter. He also painted several large altarpieces.

In 1632 Van Dyck moved to England, where the passionate art collector king Charles I also made him a court painter. King Charles earlier had persuaded Rubens to stay at his court. Van Dyck was granted a pension, became very popular, married the daughter of a lord and had a mistress. He also often travelled abroad. During a visit to Paris he fell seriously ill. Back in London he died in 1641. Van Dyck was buried in St. Paul's Cathedral.

The portrait is from Self Portrait With a Sunflower.