The Bible is a collection of handed-down writings, seen by believers and denominations as the word of their god. 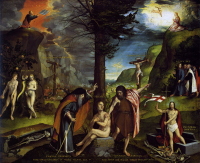 The Christian Bible consists of two parts. The first is the Old Testament, approximately equivalent to the Jewish Bible (Tanakh), written more than 2000 years ago. The second part is the New Testament, which was written after the death of its main protagonist, Jesus Christ. Depending on the denomination, some Bibles contain Apocrypha: writings generally considered somewhat less sacred.

The word 'bible' is from the Greek biblia (βιβλια), the plural form of biblion. Biblion meaning: papyrus, paper, scripture, writing, roll or book. Thus, 'bible' means 'books', which is consistent the division of the Bible into Books. The Books are divided into chapters, which in turn consist of verses, usually one or two sentences long.

The first Christian Bibles were based on a series of translations of the Jewish Bible from Hebrew into Greek. Written between 250 and 100 BC, these were known as the Septuaginta, a reference to the legend that they were made by seventy scholars. The Septuaginta were used by the first Christians for the purposes of conversion. Later translations of the Old Testament use older original Hebrew writings for a source.

Many centuries would pass before the Christian Church reached consensus on which texts should be added to the New Testament. There were numerous gospels and letters by apostles, most of them in Greek, the lingua franca of the Mediterranean countries in the 2nd Century. One translation set the standard: St. Jerome's Vulgata. This Latin translation was done around AD 400. Until this day all Catholic Bibles are based on the Vulgate.

Wyclif's Bible. The first complete Bible translation in Middle English. Done in the 1380s by a team of translators headed by the academic John Wycliffe, later dubbed the 'Morning Star of the Reformation' by historians, it included commentary and criticism. Considered heretical by the Church authorities, Wycliffe's translation was condemned and his spiritual movement and followers fiercely persecuted and annihilated.

The 16th Century witnessed various movements for Church Reform, many requiring a translation to suit their purpose. Possibly the most famous amongst these is Martin Luther's German translation of the Christian Bible. Luther published his New Testament in 1521, working from a Latin text translated from the Greek and edited by the Dutch scholar Erasmus. In 1534, Luther translated the Old Testament, excluding the Apocrypha. William Tyndale also used Erasmus' text for his 1526 version of the New Testament. Then he began translating the Old Testament, working from Hebrew texts in Germany and Belgium, but never finished, as Henry VIII had him burned at the stake in 1536.

Conteyning the Old Testament,
and the new:

Newly Translated out of the Originall tongues:
& with the former Translations diligently compared and revised, by his Majesties Special Commandment.

Appointed to be read in Churches.

John Rogers combined Tyndale's work and that of Myles Coverdale into the first complete Bible in English, known as Matthew's Bible and published in 1537. In 1539 Coverdale was granted permission to publish the Great Bible, which thus became the first Authorized Version. Several decades later King James I ordered a new Authorized Version which was published in 1611 and became known as the King James Version. In addition to Tyndale's translations, Greek and Hebrew source texts were used. The King James Bible would become the standard Bible for more than two and a half centuries to follow.