home » Art » special topics » Off with his head!

Decapitation in the Bible

The Bible is the setting of many a lurid and eerie scene, and these bloody episodes have never failed to inspire artists. 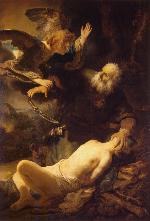 The Patriarch Abraham is stopped by divine intervention or else his son Isaac would have been the first victim of decapitation recorded in the Old Testament: God sends an angel to prevent the slaughterous offering of the son in the nick of time, and a ram, having miraculously appeared on the scene, is sacrificed in the boy's stead (ref. Genesis 22).

Muslims yearly commemorate what is known as the Testing of Abraham by slaughtering a sheep during the Feast of Sacrifice. In the Koran, Abraham is known as Ibrahim and it is his son Ishmael who is to be sacrificed. Both Rembrandt (right, here) and Caravaggio (here and here) painted this thrilling story. 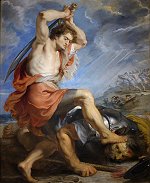 When you think of David, a boy with a sling comes to mind who kills a Philistine giant known as Goliath. The slaying of Goliath causes such panic among the Philistines that they are no longer a match for the Israelites and the Judeans, who drive them off. The rest of the story is not always disclosed: David takes Goliath's sword and decapitates him. He then takes the head and shows it to King Saul. This is the story of 1 Samuel 17. Both Rubens (left, here) and Caravaggio painted this episode, Caravaggio more than once, in fact.

David is the undisputed male hero of the Old Testament. His female counterpart is Judith, the fair widow from Bethulia, the town besieged by the Assyrian warlord Holofernes. Her story is told in the Apocryphical Book of Judith. Judith cunningly manages to find her way into Holofernes' tent, where she strikes without mercy. Back in town she declares that the hand of God guided her in her mission. Her moment supreme is depicted by many artists, such as Caravaggio and Artemisia Gentileschi, and also in medieval illuminations such as the one shown here (Azor masters).

In the New Testament the victims are no longer the enemy they were in the Old Testament. Now the tables are turned.

John the Baptist, Repentance Prophet and precursor of Jesus, is locked up by Herod Antipas, the ruling tetrarch of Galilee, for criticizing his divorce from his wife and his marriage to Herodias, wife of his half-brother, also named Herod. But Herod Antipas cannot get himself to kill John. He is aware that the people consider him a prophet and what's more: Herod is impressed by what John has to say. On his birthday party, Herod watches Salom�, daughter of Herodias, dance for him, and, much taken with her elegant performance, asks her what favor he can bestow on her. Salom� asks for and subsequently receives the head of John the Baptist.

Mark 6:19-20 and Matthew 14 both recount the story of Salom�. She is not actually mentioned by name here but historical sources unveil that this must have been the name of Herodias' daughter.

Caravaggio painted the decapitation of The Baptist twice, here and here.