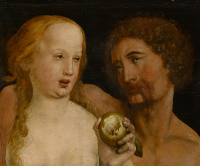 The Fall, as described in Genesis 3, marks the beginning of all human suffering. God creates Adam and Eve and gives them the Garden of Eden to live in. The can eat from all trees bar one: But of the tree of the knowledge of good and evil, thou shalt not eat of it: for in the day that thou eatest thereof thou shalt surely die. (Gen. 2:17)

A crafty snake manages to convince Eve that only by eating the fruit from that one tree will she know the difference between good and evil, and that it will not kill them. The fruit looks juicy into the bargain so Eve takes a bite and gives some to Adam as well.

Michelangelo: The Fall of Adam and The Expulsion from Paradise 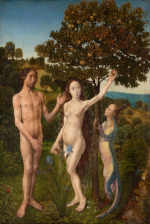 God is not amused at this disobedience: he damns the snake, passes woman under the domination of man, makes man mortal and drives Adam and Eve from Paradise. Their sin would be henceforth be known as the original sin.

In the expressive arts the treacherous snake is often depicted as merged with the tree.