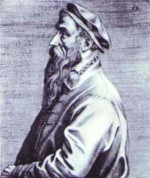 South-Netherlandish painter and father of Jan Bruegel. His contemporaries dub him 'Boeren-Bruegel' (Farmers-Bruegel) for his skilful sketches of country-life, a nickname that does not do justice to either his work or his talent. In addition to the famed Wedding and Kermis paintings, Bruegel creates landscapes, devout works and impressions of Hell in a confident and expressive style with great flair for composition and space. Much of his work is clearly inspired by Jeroen Bosch. What is unusual about his religious work is the setting: the landscape and figures in many of his works are Flemish, not Middle Eastern, and Saul's conversion takes place in the Alps – most likely a remnant of Bruegel's most recent trip to Italy.

Bruegel was probably born in the village of Brogel (also: Breugel or Brugel) in the Kempen. Until 1550 he studies with Pieter Coecke. In 1552-1553 he travels to Italy, where he is introduced to the works of, among others, Michelangelo. For the development of his style, the landscapes he paints on the way are of greater significance than the impressions Italy makes on him. Once back in Antwerp and after his marriage to his tutor's daughter (1563) he settles in Brussels, where he dies in 1569.

He signs his work Brueghel until 1559. Later he leaves out the H.

work by Pieter Bruegel the Elder