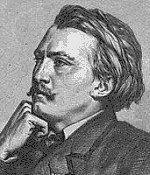 French illustrator and etcher, born in Strasbourg, dies in Paris. Famous for his printed illustrations of over 100 books, among which the Bible, fairy tales (by Perrault) the works of Dante (Divina Comedia), Lord Byron and Cervantes (Don Quixote).

Art connoisseurs consider Doré a romantic exponent of the 19th century whose work is devoid of artistic value but whose importance lies in his contribution to the development of book illustration.

For his bible illustrations Doré makes optimum use of contrast and chiaroscuro, often reaching quite mystical effects. His illustrated bible in folio format is a sensation from its moment of publication in 1865.

Around 1870 Doré stays in London for a considerable time where a publisher invites him to sketch a portrait of the city in 180 prints (London, a pilgrimage).

Doré does not manufacture all his engravings himself. In his studio his sketches are transferred onto plates. At one time he has a staff of 40 working to meet the demand.