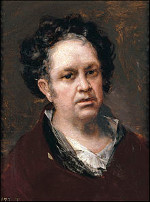 Francisco José de Goya y Lucientes was a Spanish painter and printmaker, born in Fuendetodos in Aragon. His father was a gilder. Goya was raised in Zaragoza, waar he studied under the painter José Luzán. After a few years he left for Madrid, where he tried to enroll in the Royal Academy of Fine Arts but was turned down twice. In 1770 he moved to Italy.

Back in Spain in 1771 he received commissions in Zaragazo and took further lessons from Francisco Bayeu.

Over the years his work became popular among nobles and members of the royal court. In 1786 he was appointed painter at the court of king Charles III. At the time most of his work were portraits.

In 1793 an illness left him deaf. He continued to work at the court, also during the Spanish-French war of 1808-1814, the Peninsular War. From 1819 on he lived in the countryside, where he made his dark series, the Pinturas negras, including a Judith and Holofernes. Disappointed in the reactionary post-war monarchy, he moved to France in 1824, where he died in 1828 in Bordeaux.

His style developed from classic to modern. Modern masters like Manet and Picasso were influenced by his work.

Goya married a sister of his teacher Bayeu, Josefa, in 1773. The couple had seven children but only one reached an adult age. Josefa died in 1812.

The portrait is a self-portrait made in 1815.