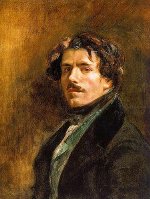 French painter and draftsman. His father was a minister of foreign affairs and later ambassador during the French revolution. Rumour has it that Eugène's real father was the prominent diplomat Talleyrand.

Delacroix would soon become the most important member of the French romantic movement. He was influenced by the work of Rubens and Veronese and later by that of Velàzquez and Goya. In 1825 he spent a few months in England, where he was inspired by the poet Lord Byron and the landscape painter Constable.

An inheritance and good contacts in higher circles enabled him to fully focus on his work as an artist. Most of his work is historic, with subjects such as classical battles. After a journey through Spain, Algeria and Morocco (1832) his work paid much attention to exociticism and orientalism - typical romantic subjects.

Besides painting he also illustrated several book publications, such as the works of Shakespeare, sir Walter Scott and Goethe.

In the history of art Delacroix is relevant because of the example he set for the impressionists. He used a rough but swinging brushstroke, experimented with colours and light and sometimes neglected proper use of perspective: all typical elements of the impressionist style. Some see him as the link between the classic style of the old masters and the modern movements that arose in the 19th century.

Eugène Delacroix died in 1863 and was buried at Père Lachaise cemetery in Paris. He created over 850 oil paintings and more than 2000 drawings and watercolours. Among his works were many with a religious subject, tempting some to consider this worldly Parisian the most important religious artist of the 19th century.

He wasn't a practicing Christian. The subjects of his religious works were mainly well-known themes from the New Testament: Agony in the Garden, Christ on the cross, Lamentation/Pietà, the Good Samaritan, to name a few.

The portrait is a self-portrait from 1837.